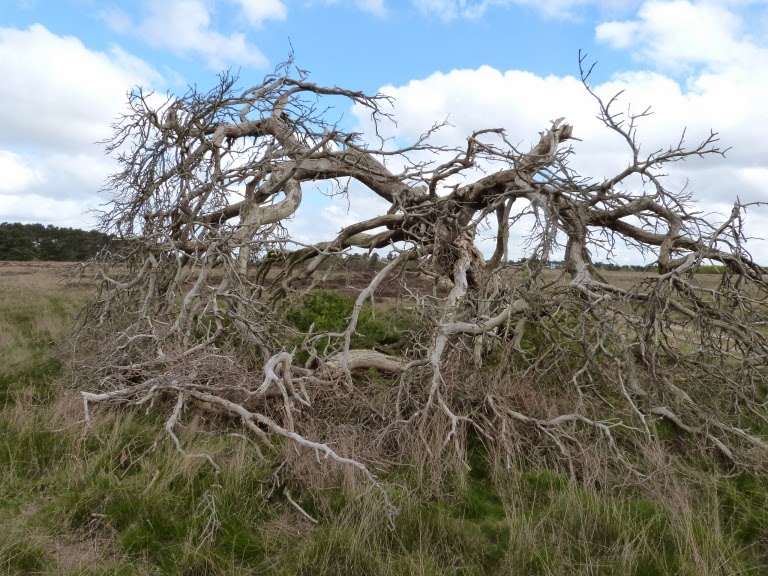 28 group members assembled in the car park at Kirkby Moor on a beautiful, sunlit evening where the midges and small, biting flies appeared to enjoy the flavour of the insect repellent that had been liberally applied. However, they did not detract from the two and half hour walk and talk given by the erudite Dave Bromwich, Head of the Mid-Lincs LWT Reserves. He made a special effort to obtain the group's opinions on certain matters of site management to enable him to reflect these views from LWT members when the ongoing plans for this site of were discussed.
The area of the 'Moor' embodies the LWT property of Kirkby Moor and Kirkby gravel pits together with a management consideration of surrounding farmland and the Forestry Commission's Ostler's . Soon it will officially include the old Woodhall Spa airfield. As always I was amazed to learn how much control and work goes into preserving these areas to make them look 'natural' and to create a living landscape. The LWT management aims for the site are quoted as:-
"to maintain the heathland and encourage more heather and wet heath conditions; reduce the area of bracken; control the spread of scrub onto the heath, while maintaining some developing scrub; and sustain the floristic diversity of some areas by regular mowing and by grazing with sheep."
We did not explore the open space of acid heathland that one crosses to reach the car park. There was no heather in bloom but swallows were zooming across at low level to pick off the insects and I saw five of them having a dust bath in the middle of the track. The layer of sand deposited here in the last Ice Age overlays a bed of clay. The sand acts a as a natural filter for surface water and the clay prevents it from draining away. Consequently there is a supply of fresh water which is captured in a small reservoir nearby. We later saw channels with sluices that had been built in Edwardian times to drain the area. 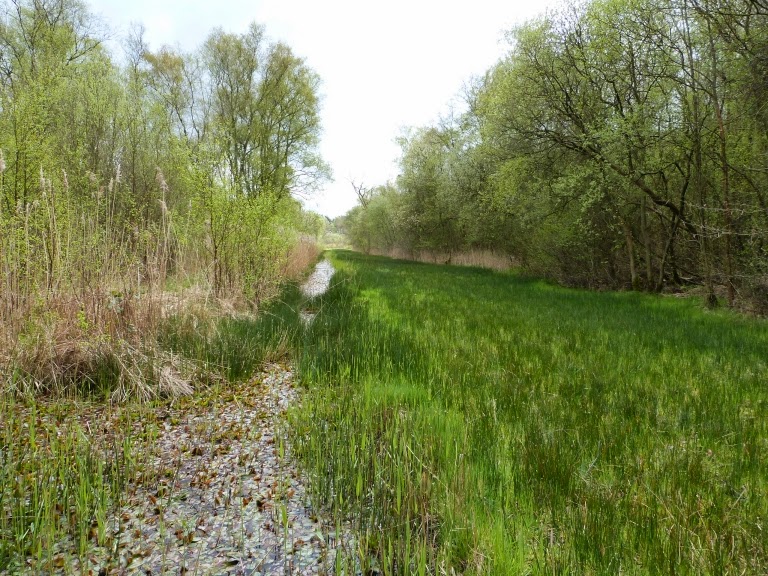 As we moved through the mixed woodland of Willow and Ash along specially cleared grassy paths Dave asked us whether the underlying scrub and some of the smaller trees should be cut back to allow more light to permeate with the resulting increase of plant diversity or whether it should be left to develop naturally into secondary scrub. We were pleasantly surprised to be consulted, especially when Dave added that some members of the public wrote angry letters of complaint to the LWT, 'every time we chop down a tree'. We felt that the scrub should be cleared particularly as the work would be carried out by a contractor free of charge who would sell the wood for domestic use to cover his costs.
The Wood sage and Climbing corydalis growing in the lighter patches were relics from older Oak woodland and this area was the best site in the for the Hazel pot beetle which lives in the Birch and scrub. A further management dilemma was that of Sycamore trees which were spreading north and could become a dominant species. They cast such a shade that little can grow underneath them, so no biomass. We saw a woodland clearing where the Sycamore and many other scrub plants such as Birch and seedlings had been reduced to let in more light. Here the Heather was rapidly regenerating.
At this stage we heard a Cuckoo - some of us actually saw it - and heard the barking of a Muntjac deer. We learned that 9 species of bat live in the woods and we saw evidence in the tree trunks of Great spotted and Green woodpeckers. Sadly we did not see these species but there was great excitement when a Slow worm slid across our path. The reservoir was a haven of peace with the Silver birch trees and Cow parsley forming a backdrop to the reeds. A Common tern provided an aerobatic display whilst a few Mallards and a Coot paddled about looking for food. Here was another management dilemma. Beneath the surface are Pike and smaller fish, probably Perch and Rudd, which Dave grouped together as 'silver fish'. There too are insect larvae small crustaceans , water fleas and bacteria all forming part of a complex food chain. If one attempts to control any of the species it causes an imbalance in the chain. When consulted, opinions were divided and even flippant varying from, 'take out the Pike' to 'eat the ducks'. I think that the status quo should remain with cycles being accepted in the food chain whereby some species succeed and fail and in turn are replaced by a different set of dominant species.
We moved across a water channel where the sluices had been adjusted to permit the passage of Eels. The delicate blooms of Lady's Smock peeped through the grasses lining the water courses. This plant is known locally as the Cuckoo flower because it it blossoms in early May when the Cuckoos start to call. We skirted the edge of a field where the LWT herd of Red cattle were grazing. The breeding herd consisted of cows and calves in the company of a large bull called Timothy. This stroll brought us onto the old Woodhall Spa airfield runway. Although we were standing in the middle of of grassland and gravel pits with cattle and sheep grazing not far away it was not difficult to imagine the activities that had taken place here within living memory. I was not the only one who reminisced about the sound of Lancaster aircraft and the activities of RAF Bomber Command during the Second World War. The grassland would, in time, become a public access area with paths mown to prevent aimless wandering.
Decision time again, do we cut down a considerable number of trees to extend the grassland or leave them? I was pleasantly surprised to hear that one of group had changed his view point and thought that the trees made an excellent screen and wind break to an already extensive stretch of meadow. Again the grassland had to be managed; the Dandelions, Vetch, Cowslips, Yellow Rattle and Red clover growing amongst the various species of grass were okay. But the White clover had to go! It is so efficient in fixing nitrogen that the soil becomes too rich for wild flowers.
Our final change of scene was a venture in the wet side of the woods where we saw the attempts being made by spraying to eradicate an invasive species. The Piri-piri burr is thought to have been introduced to the old airfields on the kit bags of servicemen. Its hooked burrs mean it is easily spread in the wild by sheep and other animals. Within the woodland a deep sink hole had been created to act as a sump. In turn it has become the home of Palmate newts, We think we saw one amongst the murky, iron coloured water. The wetland area is the home of the fragrant Bog myrtle, Bog pimpernel, the blue flowered Green alkanet and Bog bush crickets.


It was nearly dark, we were still getting bitten and some folk were looking very tired. But what a tour, so much information, so many habitats and the chance to influence the management of one of our LWT sites. Thank you Dave Bromwich. We accept your offer to visit again in a couple of years to see if any of our proposals have been implemented. RW
Posted by biffvernon at 07:42