The annual Nancy Loft Memorial Lecture was, this year, given by Paul Learoyd, Chief Executive of the Lincolnshire Wildlife Trust, on the 23rd of November 2018.

Paul's talk ranged widely over the work of the Trust, illustrating the diverse issues that have to be faced, referencing the county's wide range of habitats and biodiversity.  We heard first about some of the species in decline; the Lapwing, so symbolic to the Lincolnshire Wildlife Trust, is now just an overwintering visitor and no longer seen in the summer; the Bullfinch, once regarded as a pest, is now an uncommon sight in many parts of the county. Wood pigeons, on the other hand, are now counted in millions. Another group of animals, the slugs, are represented by some fifty species in Lincolnshire, few of them pests, but, as Paul wryly commented, it is hard to get a membership subscription on the slogan 'Save the Lincolnshire Slugs'.

Little Egrets are now common and the Great White Egret sometimes seen. Change is upon us, be it climate change related, the loss of habitats or the establishment of new habitats. How to manage our land and reserves is central to the Trust's decision making. Unexpected events such as the emergence of Chalara, the Ash die-back disease, is a major challenge as it affects one of our commonest trees and the couple of dozen species dependent upon it. Public perception of different species varies; everyone loves the Primrose, so important to insects emerging early in the year, but Ragwort is less universally loved. Paul stressed its value in the ecosystem, with its 25 dependent insects, including the well-known Cinnabar Moth, and its continual flowering through the years, providing nectar well into autumn.

Lincolnshire has some real rarities. The Natterjack Toad, first described at Revesby by Joseph Banks, is now restricted to a small colony of perhaps three dozen individual adults at Rimac. At the same location we find the only British representatives of the Marsh Moth. The Tall Thrift is another rarity, finding its only British home at Ancaster. Record keeping, of both such rarities and the more common species, has been invaluable to our understanding of our wildlife. Over five million records have been built up during a century and more, and the Trust's collaboration with the other members of the Greater Lincolnshire Nature Partnership (GLNP) has now born fruition in the shape of a searchable database, the LERC Search.

The Lincolnshire Wildlife Trust now has over 28000 members and 1500 volunteers. Paul added a note of caution to that last number as many volunteers do their work quietly and may not be known to head office, their work nonetheless being invaluable. The Trust has gradually increased its landholdings of reserves over  the 70 years since Ted Smith, at the age of 28, signed the founding papers, and the following week took the lease of Gibraltar Point. Increasing attention is now being brought to wider landscape man
agement, improving connectivity between reserves with 'corridors' and 'stepping stones', and sometimes, as with the case of the American Signal Crayfish, creating buffers to reduce connectivity and thus lessening the risks presented by invasive species.

Paul turned to matters marine, a large part of Lincolnshire's wildlife inhabiting our offshore environment.  We have been learning about the damage that waste plastics can do and Paul praised the volunteers who do the beach cleans. Less is generally known about damage underwater, unseen. Trawling the shallow seabeds for brown shrimp wrecks the habitat, much of the produce being exported to South Korea. Lobsters, which can live to 60 years, appear to be doing well but this may be a reflection of removal of predators; over-fishing has meant the cod have gone.  The once vast oyster-beds have also fallen victim to the trawlers.

Back on land, Paul reflected on 70 years of the Trust with photos showing changes in the landscape. The River Lymn, once meandering through it's flood plain and occasionally wetting the water-meadows, now flows straight to the sea within artificial banks. The River Glen, a clear-flowing stream in its headwaters, carries a heavy load of silt from the erosion of agricultural soils. But there are bright spots too, from the borrow-pits on the coastal Marsh, vital resting spots for migrating water-birds, to the former arable land being restored to reedbeds, shallow meres, seasonally flooded pastures and hay meadows of Willow Tree Fen. 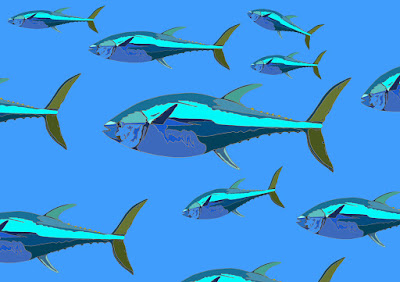 One of the slides shown during Paul Learoyd's lecture, Jo Mortimer's drawing of the Atlantic Bluefin Tuna, once a common top predator in the North Sea, fished to local extinction, but recently returned to our waters.