A few notes on yesterday’s Bee Summit in London.

There were about 80 attendees at the Royal College of Physicians near Regents Park. It was organised by the Friends of the Earth and WI and was the second Bee Summit. Various stakeholders were represented: WI, FoE, BugLife, The Wildlife Trusts, NFU, Highwayd England, RSPB, CEH, Universities of Leeds, Reading, Newcastle, Soil Assoc, some locl authorities, the Landscape Institute, beekeepers, M&S, Waitrose, farmers, RHS and PAN UK.  The first Bee Summit lobbied Rupert Charles Ponsonby, 7th Baron de Mauley (the then Under Secretary of State for DEFRA) to set up the National Pollinator Strategy which was published by DEFRA last November.

This second summit was for the Bee Coalition (including the WTs) to present on case studies of action taken on the ground since 2013; to report on what we have learned from research in the meantime and to comment on the NPS and make recommendations for Government in the areas that are thought to be weak in commitment to the initial aims set out in the first summit. FoE has launched the ‘Policies for Pollinators’ report on behalf of the Bee Coalition which highlights the issues facing pollinators and shortcomings in the NPS which need addressing.

The current Minister for DEFRA, George Eustice MP has a farming background from Cornwall. He attended to give a 10 minute address.  We were disappointed that he arrived late and left almost immediately afterwards.  He ran through the elements of the NPS but didn’t give us any of the assurances we are pressing for.  He insisted that forthcoming DEFRA cuts should not affect pollinators because Pillar 2 of the CAP should be adequate while other departments within DEFRA will be encouraged to ‘work closer together.’

Matt Shardlow, CEO of Buglife pointed out that the Governments ‘framework ‘ for monitoring and further research was not a commitment to direct any funding or to create policy. BugLife are well informed of the neonic studies so far and have synthesised a number of articles you can find here.

FoE Director Craig Bennett called for leadership from central Government in the form of policy and support which has not been forthcoming.

The science reported by Geraldine Wright from Newcastle University was very worrying concerning neonicotinoids.  The evidence that they have a bad effect on bees at even low, field level concentrations is now building strongly and residence time in soil and uptake by subsequent plant growth (even pollen and nectar strips!) is now a major concern requiring further research.  It was made clear that farming attitudes still wish to use neonicotinoids prophylactically rather than not at all or in a threshold based approach as part of Integrated Pest Management. Prof Simon Potts from Reading illustrated how pollinator-dependent crops and bee species ranges and phenology are forecasted to disconnect dramatically by 2050 given current climate change.

The Landscape Institute pushed for GI and cited its online publications that can be used to support local planning authorities and local plans.

The RSWTs main contribution to the Bee Coalition is the work around Bees Needs.

What we’ve been doing in Lincolnshire with Life on the Verge and the Meadow Network Project is really valued by researchers at Reading and the CEH who approached me personally.

A lot of the cited pollinator action on the ground by FoE groups was biased towards cornfield annuals in urban areas but at least it was noted that his has been very successful in just 2-3 years in raising the public’s awareness of the plight of pollinators.

This second summit was at least a good chance to share knowledge and provide mutual encouragement for a variety of initiatives.
Big gains made so far but big challenges ahead with lots to lobby for.

Coinciding with The Bee Summit  was the launch of a new book, A Field Guide to the Bees of Great Britain and Ireland by Steven Falk, illustrated by Richard Lewington.

A superb book, and the authors' websites are worth a visit too:
Steven Falk
Richard Lewington 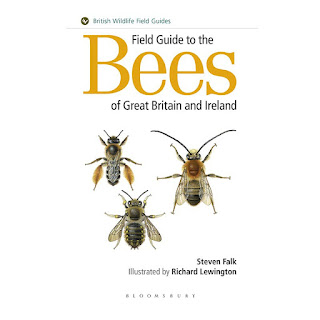 Here's a film of one our solitary bee species, a male Wool Carder Bee (Anthidium manicatum) patrolling his patch of Marsh woundwort....and some rare footage of a female carding the wool inside a nest that has been exposed.  YouTube

Posted by biffvernon at 08:59 No comments:


Following Monday’s announcement regarding severe cuts across DEFRA, the RSPB and The Wildlife Trusts have come together to highlight what it could mean for the environment

Stephen Trotter, The Wildlife Trusts’ Director, England, said: ‘Even before yesterday’s announcement, the Government was only investing a tiny proportion of our national income in environmental stewardship and the restoration of wildlife habitats – its already far below the levels that we need. It will now be reduced to such low levels that there are real question marks over whether the Government can continue to deliver its most basic functions and responsibilities for the natural environment. When everything we depend on comes from the natural world this makes no sense for the economy and it makes no sense for the health and wellbeing of our society.

The UK has been running up a massive environmental deficit over recent decades and which future generations will have to pay off. These cuts are a false economy and will undermine and jeopardise the future growth and development of the economy. I fear this is a missed opportunity for Government to start paying off the environmental debt that we’re leaving to our children and grand children. We are now faced with the extremely worrying prospect that Government no longer has the ecological literacy or functionality that society needs if we are to build a genuinely sustainable future.‘.

Read more at Wildlife Trusts News.
and Mark Avery's blog.
Posted by biffvernon at 08:42 No comments:

MUCKTON WOOD SITE GR TF 382810
VOLUNTEERS REQUIRED     SUNDAYS 15 & 29 November
Rick Hill has taken on the responsibility for looking after Muckton Wood where the pond has been neglected over the past few years. Rick hopes to restore the pond to its former glory. After the two November sessions he will assess the situation and possibly plan further work early in 2016.
Rick would welcome some help with the pond clearing from 0930 to 1130 hrs on the two Sundays in November. You need your wellies but tools and gloves will be provided.
Call Rick Hill on 01507 601123 / 07981 227284 if you are interested in helping.

Many thanks to those of you who supported the Information Coffee Morning last month. The raffle raised over £100 and £289 worth of LWT goods were sold.

Members of the LAG committee are investigating the possibility of setting up a Wildlife Watch Group for children in the area. To do this a leader is required. A typical Wildlife Watch leader is someone who enjoys working with children, who is enthusiastic and is concerned about wildlife and the environment, and who enjoys being out of doors. No specialist knowledge is required.Such a person may not yet be a LWT member so please spread the word. Both the LWT and nearby Watch leaders will give support and training for the role.
For more information contact Avril Huke on lag2014rww@aol.com

At 1100 hrs on 2 November I was sweeping up leaves in my garden in Louth when I heard the honking of geese. I looked to the east and saw tiny specks in the sky that continued to fly south for the next two minutes. These were skeins of Pink-footed geese on their way to overwinter in the Wash. A spectacular sight on our own doorstep. Who needs Autumnwatch!? I have also seen Redwings on the berries in the trees by the side of the Charles Street tennis court.
Are these harbingers of a hard winter? Please let me know of any similar sightings.