The next meeting of the Louth Wildlife Watch Group will be on Sunday 21 November starting at 2 pm. We will all meet at the café.

This time we have a fun family treasure hunt planned! As you follow the clues you will be able to marvel at the beautiful valley scenery and the vibrant autumn colours.
There will be prizes for everyone!
Warm waterproof clothing and sturdy shoes or boots are advised!
We hope you will be able to join us!
Please book by email to keithjpalmer@mail.com 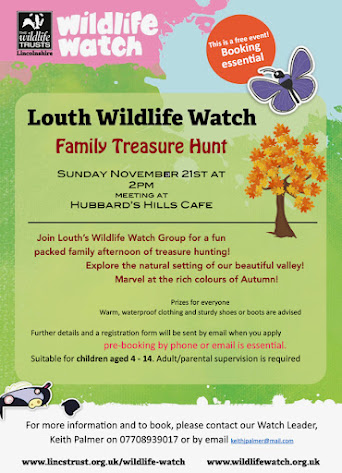 Posted by biffvernon at 21:41 No comments:

Louth’s Wildlife Watch Group joined forces with members of the Louth Navigation Trust at the historic Navigation Warehouse for their latest meeting on Sunday 24 October.

Twelve children aged between 3 and 11 years, and their parents enjoyed an afternoon learning about the canal’s rich industrial past and the fascinating nature to be found along its banks today.

Alison began the session with an overview of the canal’s history, its development and change over time. Then Roger led the group on a circular walk along the bank pointing out places of interest along the way, which children were able to mark off on their own maps.

Returning to the warehouse children formed into family groups to test out the popularity of different types of food on the large duck population there. Sweetcorn and oats seemed to go down very well, but peas were less well received.

Returning inside children engaged in a range of nature related art activities including pairing waterside animals with their habitats, drawing animals of the canal and designing their own poster to publicise various aspects of the canal.

Before departing we all thanked the Navigation and Wildlife organisers for the session, and parents took home a guide to canal walks so that they could explore further on another occasion.

A thoroughly enjoyable experience for all!

Posted by biffvernon at 21:35 No comments: