PRESIDENT OF THE LINCOLNSHIRE WILDLIFE TRUST

I am delighted to report that Mr David Robinson OBE has been elected President of the LWT. David has been involved with the trust in so many ways since its foundation when he was appointed Secretary. He was also the founder of the Louth Area Group and set up its inaugural meeting on 9 January 1970.
I am sure that all members of the LAG join me in offering David our sincere congratulations on his appointment.
Ray Woodcock Chairman LAG
Posted by biffvernon at 09:13 No comments: 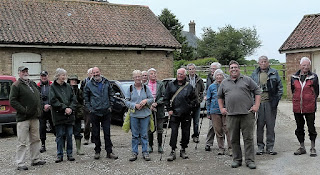 A Red kite soared over sixteen LAG members as our host Phil Gibson told us that his great grandfather had bought the farm in 1912 for the sum of £2,300 and the family have run it ever since. Currently The Elms Farm has a mix of arable and cattle with a cash crop of wild flowers. Phil is a man with many agricultural facets. As well as managing the farm he acts as an adviser to other farmers about water management and how to cope with the chemical balances that the crops need whilst adhering to the regulations set down by various authorities.
Our planned two hour walk around the farm’s fields and meadows lasted over two and a half hours, mainly because of our questions and Phil’s full responses. The almost three-mile circuit really brought home to us the complexity of modern farming. Even though much of the planning is carried out by computer it still takes seventy years to create a meadow! 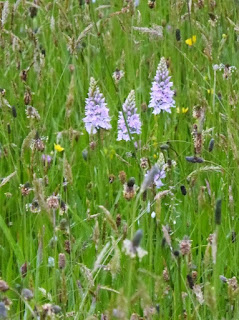 The walk under a grey sky took us over a hillside where the dominant umbellifers changed from Cow parsley to Pignut. The grazing cattle viewed us disdainfully as we watched the carp rising to snatch insects from the surface of a relatively new pond whilst the Yellow flag provided bright patches of colour around the edges. Throughout our walk over a swathe cut through the lush grasses at the edges of the fields we had wonderful vistas of the rolling Wolds and for me the variation of green vegetation of all shapes and sizes was quite breath-taking: so many wild flowers and grasses.
We paused to look at a the glaciated Swaby valley and learnt that the farmland was based on the site of a terminal moraine. Further on we noticed the clarity of the stream which led Phil to describe the ways in which chemical imbalances were still being adjusted as a result of the days of acid rain over forty years ago. A fact that sticks in my mind is that nitrates have to be controlled to five parts in a billion – that is equivalent to a drop of water in an Olympic sized swimming pool! 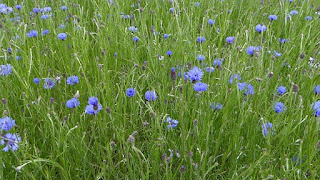 We moved past a badger sett to an area where the Early purple and Marsh orchids were beginning to emerge. This location was near to the source of the Great Eau. We crested the hill to a blaze of Cornflowers to our left with Buttercups and Michaelmas daisies to our right. This was where Phil drilled and sowed the wild flower seeds which were harvested and sold by ‘Grow Wild’ near Boston.
As we trudged over another hill and then steeply down to the farm yard we heard a Skylark. He was the harbinger of the rain that had held off for the evening. The hat was passed round as a way of saying thank you to Phil who spent a long time with us and did not charge for his services. Phil was pleased and told us that the cash collected would go to the local church whose land abutted his farm.
A great outing that was rounded off by heavy rain as we drove out of the farm gates. RW

Our next LAG event is the National Meadows day at Red Hill on Saturday 2 July.
Just drop in between 1000 and 1600hrs.

Posted by biffvernon at 11:03 No comments: