Only six of us turned up at the site south of Scunthorpe today where we were welcomed by Eddie Gaunt and two other insect and plant specialists. We spent almost three hours moving slowly through scrub, woodland paths, heathland and marsh margins.

Ringlet, Comma and Red Admiral butterflies were easy to spot, so were the familiar small Common blue damselflies. However, nearly very plant had an interesting insect lurking on it or under it which enabled the specialists to point out Micro-moths, Soldier flies, Scorpion flies and White-tailed bumblebees. We must train our eyes to notice these species when we visit other reserves even if it just to notice the Pollen beetles on the yellow Cat’s ear flowers.
The Spear thistles were in full flower and the willow herbs were coming into bloom. Marsh orchids joined Greater bird’s foot trefoil to add colour to the grassy areas. The dense thickets of Phragmites rush and Hemp agrimony screened the water’s edge which in place was infested with the succulent leaves of Bogbean. I had not seen the yellow carnivorous Bladderwort before and here was a pond covered with it. Chris Packham would have had an underwater camera showing how the plant traps and ingests passing water fleas!

We saw birds – rafts of Tufted ducks and Coots, some elegant Great crested grebes a pair of Common terns with 3 fluffy chicks and a lone Pochard and we were treated to a fly past of 3 Egyptian geese. Young Cormorants were hanging out their wings to dry whilst Sedge warblers warbled in the reeds.
Towards the end of our stroll through the reserve Specialist John was asked about the presence of fungi. This was his cue to disappear into patch of woodland and to emerge clutching a football sized Puff ball fungus.
It was a fascinating visit – so different from our Wolds and coastal areas. I think we should find a date next summer when more people are able to be enthralled by the insects and flowers of these worked out quarries. RW

I have attached some more of Jane’s excellent pictures as well as adding a photograph kindly send to me by Geoff Mullett entitled, ‘the Brood of 2017’ 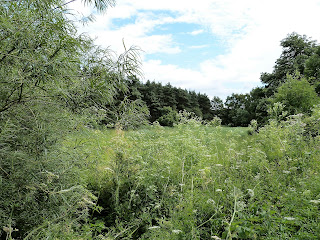 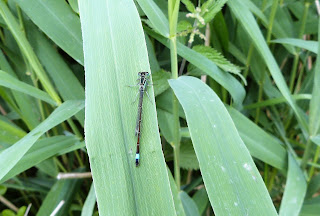 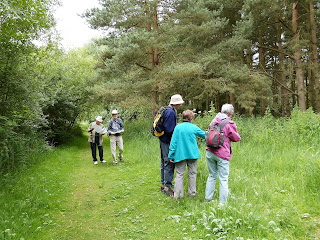 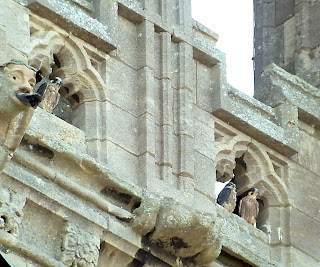 Posted by biffvernon at 14:48 No comments:

Some time ago Aidan Neary, the LWT Wildflower Meadow Project Officer, ask me whether LAG members would be able to assist with the National Plant Monitoring Scheme on farmland near Stenigot. After a recce in depth last August the committee members thought that we could carry out the task but given various constraints we would need to have a dozen people working together on the same day. I am pleased to report that 25 members showed an interest and 13 of us carried out the complicated task on the sunny morning of 31 May.
Now is orchid time; we all love the beautiful Bee orchids. However, watch out for the delicate pale pink Common spotted orchids that grow amongst the pollen laden grasses. Or take a walk down the path at Gibraltar Point from the first (not main) car park to view orchids in profusion. There are also Spoonbills, baby Avocets and fluffy gull chicks to be seen from the hides.

OUT NEXT FIELD TRIP will be a flower and insect visit on Saturday 24 June to LWT Messingham Sand Quarry. This will be an easy walk through woodland paths and by the edges of ponds led by Eddie Gaunt and his team of knowledgeable volunteers. Meet at 1100hrs at the car park which is east of the B1400 Messingham-Kirton road opposite Scallow Grove Farm, Messingham, Scunthorpe. Map reference SE 908032. There are no loos on site but it is a splendid picnic area.
Ray Woodcock Chairman LAG
Posted by biffvernon at 09:07 No comments: 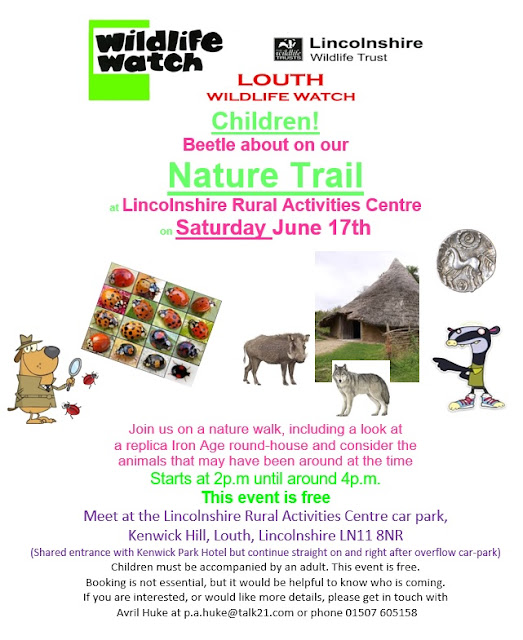