Work parties to convene at 0930 on roadside at the reserve gate.

The car park at Snipe Dales was almost full just after lunch on Sunday with families picnicking, children playing and in some cases dogs rushing around. We were aghast to see a big group sitting by a barbecue – albeit contained with a ceramic pot. Do people not read warnings of fire risk or even have any common sense? By the time 2.00 pm arrived 17 LWT members were ready to begin our outing. It was good to see new LAG members and to be joined by ladies from other groups. The sun was shining and the paths were quite dry despite the heavy rain that fell on the previous day. 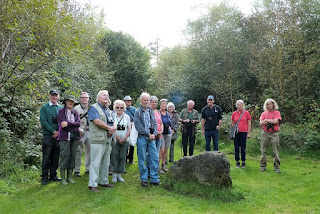 We were very impressed with the knowledge and the gentle presentation skills of Warden James Forrest as he took us up hill and down dale for the next two and a half hours. We learned about the various decisions that had to made before trees could be felled and species replaced together with how many authorities were involved in the control of the felling, cutting, cropping and grazing that went into the process of making this Lincolnshire Wildlife Trust reserve look 'natural'. As well as the Trust, the Lincolnshire County Council, the Forestry Commission and at least two other august bodies could be involved. Even the height of the grass in the rough pasture land was subject to regulation! Thanks to the support of volunteers and school projects many hours had been spent trying to eradicate the invasive Himalayan balsam, clearing paths and sadly picking up dog mess and litter.

The geology of the steep valley that forms the 220-acre Snipe Dales is fretted by chalk streams which have cut through the soft Spilsby Sandstone to the underlying Kimmeridge Clay to give a complex chemical mix to different areas of the soil. This leads to a wide variety of flora that is recorded and carefully controlled. I was fascinated to see that Apple trees had been planted – to attract the bees and other insects - and that the Lincolnshire custom of planting Cherry trees as boundary markers was being followed.
Grants had been received to enable new fencing and paths to be constructed and for a survey of the fauna of the streams to be carried out. The aquatic animals were stunned by a process of electro-fishing. James was delighted to discover the profusion of Brown trout and Bullheads plus a great number of Mayfly and Caddisfly larvae with a wide range of species of other insects and crustaceans. Water vole were identified together with Otter sprint but there was no evidence of the predatory Mink.
James advised us to visit in April to see the Siskins or to join the LWT Dawn Chorus walk in May whilst some of you may be taking your grandchildren to join the 20,000 school children who have great fun at Snipe Dales during the course of the year. They carry out mini-projects and learn 'bush craft' which involves making dens and lighting fires (under strict LWT supervision) to cook food.


A wonderful outing thanks to the time given by our friendly, erudite Warden James Forrester. He, in turn, was impressed by our fitness, knowledge and appropriate footwear!      RWW
Posted by biffvernon at 13:06 No comments:

It was an overcast morning yesterday but 9 of us collected a couple of buckets of cowslip seeds at Red Hill. If the forecast is good we hope to go again on Wednesday 14 Septemberto collect autumn gentian seeds. I will let you know.

Our next Louth Group meeting will be at 2.00 pm on Sunday 18 September at Snipe Dales map ref: TF 319683 where we will walk up and down the steep slopes whist looking at autumn colours on a guided walk led by Warden James Forrester. There is a small charge for parking. Sadly, there is no wheelchair access beyond the car park.

Time creeeps up on us. On 29 October we have the LAG Information Coffee Morning with experts on bats, otters and wild flowers in attendance. There will be a rafflle. However, at the moment I only have one raffle prize. If you have any thing suitable please let me know or bring the item to the September on October meeting. 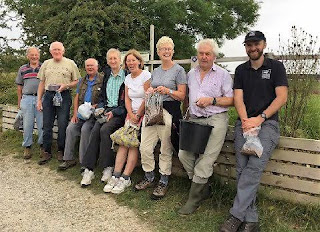 Posted by biffvernon at 10:57 No comments:

Our next Watch meeting is helping the Marine Conservation Society's Great British Beach Clean on the 18th of September 2016. 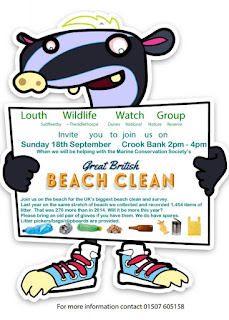 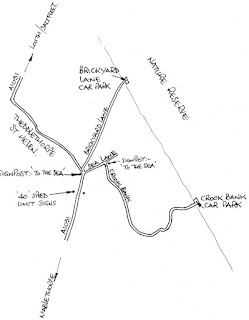 Posted by biffvernon at 22:06 No comments:

I have  had a request from Harry Turner who would like some help with seed collecting next Wednesday 7 September 2016 at Red Hill . If you can come along please meet at the main car park at 1000 hrs.
We shall be gathering Cowslip seeds for about an hour or so. Just bring a small poly bag or ice cream container for the seeds. The weather forecast is good and the views are fantastic. A few of us  were in that area yesterday and at one stage we saw  and heard five Buzzards.
If you want more details don't hesitate to contact me.
Ray Woodcock


Chief LAGgard
Posted by biffvernon at 14:43 No comments:

We are returning to Red Hill Reserve MR TF 264806 for our next  meeting on Sunday 21st August at 2pm.
With the Alford Watch group we are planning to collect seeds.These will eventually be sown in other areas.
Also, through our senses we want to experience what it is like being out in the middle of a summer meadow.
Children must be accompanied by an adult.
It would be nice for families to bring a picnic, to finish the afternoon.
Posted by biffvernon at 14:43 No comments: