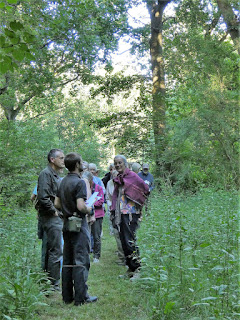 A dozen cars managed to squeeze in to the car park at the edge of Goslings Corner Wood and 23 of us sprayed ourselves with insect repellent whilst we listened to an initial briefing from LWT Warden Damien Carter. We learnt that this wood is one of the smaller Lincolnshire oak/lime woods. The variety of soils in the reserve - ranging from neutral to acidic - produce the variety of flora. (See species list below.) 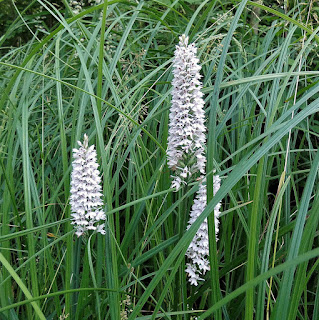 As we strolled around identifying the wild flowers Damien told us how the site was being managed. A series of coppice plots have been created off the main rides. The oldest plot at the southern end of the main ride was cut in the winter of 1989/90 and the last one in this present series is due to be completed in about 2045. In some areas new tree growth is being encouraged to restrict light reaching the ground to reduce the amount of grass growth. In another area the grass is left to enable the natural development of saplings which in turn will create fresh woodland. In a further area some larger trees are to be felled and coppiced. This work will be carried out by a contractor who also processes the timber for use as firewood and charcoal. A large meadow in the centre is harvested for hay twice a year. Sadly for us, it had just been cut so the wonderful field that had recently been full of yellow Meadow buttercups looked very bare.
The sunshine disappeared as we left the grassy paths and entered the woodland. Consequently, there was an abrupt change in the ground flora. Dog’s mercury was in profusion and we saw many Common spotted orchids. Wetter ground was indicated by Marsh thistles and Water avens.
The only birds that we saw were a couple of Wood pigeons and a Magpie although some people heard a Blackcap, a Chiffchaff and Peacocks!
Many thanks to Damien for his guidance and to Volunteer Reserve Warden Eric Sergeant who manages the site on a day to day basis.RW

Our next field outing will be to LWT Reserve Goslings Corner Wood at 1800hrs on Friday 22 June. Meet at the Hoop Lane car park GR TF 144753. Damian Carter, the LWT site manager, will show us around.
From the B1202 Wragby to Bardney road take the left turning down Hoop Lane signed ‘Chambers Farm Wood’ and carry on down the lane past the right turn that leads to ‘Chambers Farm Wood’. There is a small car park just inside the gate marking Goslings Corner Wood and cars may be parked on the road. There are no toilet facilities on site.
Jane and I went there for the first time last week and recorded over 40 wild flower species including Water avens and orchids. The mile-long, grassy path had just been mown and a few Blackbirds were very busy picking out bugs and seeds from the sweet-smelling cut grass. However, the path was a bit lumpy whilst Jane was joined by some biting insects. So, boots and mosquito spray may be a good idea.
We re-visited the Middlemarsh site near to Croft on Monday 11 June for the first time for a couple of years. The old, dilapidated hide has been taken away and the area fenced to enable easy access to the large hide which is reached by a grassy path. If you want a noisy couple of hours go soon. There are Black-headed gulls with chicks of all sizes, Herring gull families, Greylag goslings and little black balls of fluff masquerading as Moor hen chicks as well as Tufted ducks, Avocets, Oystercatchers and a few waders.
Later in the day we saw Avocets on nests at Gibraltar Point but no chicks. As always there was a cacophony of Black-headed gulls on the small islands in front of the hides and inevitably we were told that, ‘there were Spoonbills here yesterday’.
Ray Woodcock Chairman LAG
Posted by biffvernon at 11:24 No comments: