The first meeting of the Louth Area Group of the Lincolnshire Wildlife Trust for 2015 took place at the Conoco Room on the 9th of January with the temperature outside at 15°C.  That set the stage for for some of the observation reports from members of the variety of plants seen in flower recently (and a frog!).  The warm autumns and mild winters of recent years seem to be affecting our wildlife as this report from the Botanical Society of the British Isles shows.  The annual New Year flower hunt recorded an unprecedented 368 different species in flower.

The main business of the evening was a talk by David Shepherd, entitled 'On the Edge of Extinction', in which he recounted some of his work with Natural England on the Species Recovery Programme.  Several reports about the subject are available here.

First up was the case of the Field Cricket, Gryllus campestris, with it's curious mating strategies involving males accosting females out in the open or bundling them into holes in the ground.  It nests is sparse grassland where there is bare ground available but this sort of habitat has become scarce and fragmented so the Cricket has declined with only one colony, in west Sussex, known by the 1990s.  The species has similarly declined over much of Northern Europe though its range extends to Africa. Translocation  of nymphs has had some success and there are now half a dozen UK sites with surviving populations.  More information here. 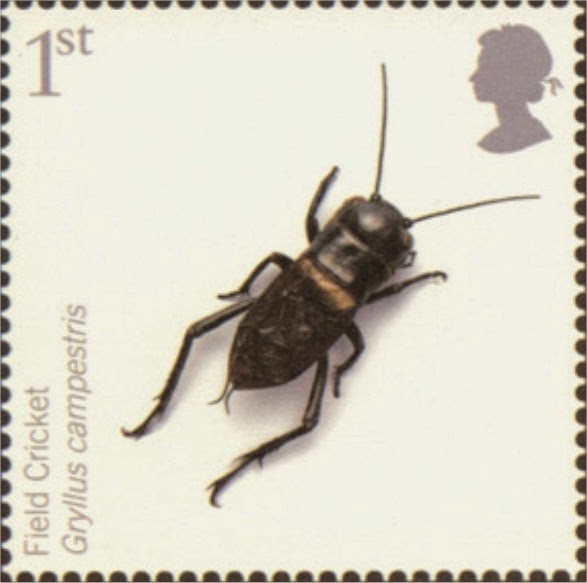 The Field Cricket was on one of the series of stamps illustrating endangered British insects produced in 2008.

David's next case study was the New Forest Cicada, Cicadetta montana.  This is the UK's only species of cicada and there hasn't been a positive sighting for many years.  It may, however, not be extinct as it is rather hard to spot, spending most of its 7 year life-cycle underground, the adult emerging for a few weeks in early summer to lay its eggs in a plant stem.  It prefers warm, sunny open glades in woodland, that allow the male to 'sing' its 20MHz hiss from tree tops while the female waits on stalks of bracken or shrubs.  It is possible that some conservation land management has, unwittingly, reduced the suitable habitat.  Indications that the cicada still exists come from recordings of their sound and a phone app is available to help in this.  It's available from the New Forest Cicada Project website.  At least this cicada, however rare in the UK, is not under threat of global extinction; in parts of Russia is reaches pest level with the damage done by the females laying eggs is young tree shoots and the nymphs feeding from tree roots, enough to kill mature trees. But we must be cautious.  Although C. montana is found across much of Europe to Iran and Russia, there may be separate populations that amount to sub-species, with C. montana best regarded as a complex rather than a single species, so loss of the UK population could be a final extinction.

The Blue Ground Beetle, Carabus intricatus, the UK's largest ground beetle, was our next subject.  It is also found across Europe but may be declining throughout its range and is classed as 'near threatened' on the IUCN Red List. In the UK it seems to be confined to Devon and Cornwall.  Very little is known about this beetle but it seems to require valleys with a south-west aspect, deciduous trees, with ground cover limited by sheep grazing and the presence of the tree-dwelling slug, Limax marginatus, upon which it may prey.  There's more information from the Devon Wildlife Trust. And the beetle makes a very short appearance on this YouTube film.

David then told us about the Sussex Emerald Moth, Thalera fimbrialis, whose UK range has been confined within the perimeter fence of Dungeness nuclear power station.  The larvae feed mostly on wild carrot, Daucus carota, and reseeding and fencing to exclude rabbits seems to have paid off on the RSPB's Dungeness reserve where caterpillars were found last summer.  The first British record was only in 1902 so this moth may be a fairly recent arrival here, at the north-west edge of its range, which stretches across Europe and Asia to the Amur River and Korea.  Habitat loss, however, is likely to account for a decline in the species across much of its range, justifying conservation efforts in the UK.

Another moth from Kent is the Black Veined, Siona lineata, is a pretty white moth with a delicate pattern of black lines, the females flying in the afternoons but the males only emerging at dusk.  It is found on just one site, a steep sloping, sheep-grazed grassland.  The caterpillars are always found on grass, mostly tor-grass, Brachypodium pinnatum, but they eat herbs such as Marjoram, Origanum vulgare.  It seems they hold onto the tall grass stalks and reach out to feed off the herb, so require a herb-rich pasture.  The Black Veined Moth used to occur across southern England from Somerset to Kent but the loss of its rather particular habitat probably accounts for its decline, though it is found, quite commonly in some areas, across Europe and as far as eastern Siberia.  So this is one species that seems more endangered in the UK than elsewhere.

The Purbeck Mason Wasp, Pseudepipona herrichii, became famous in 2008 when it was featured on a postage stamp. 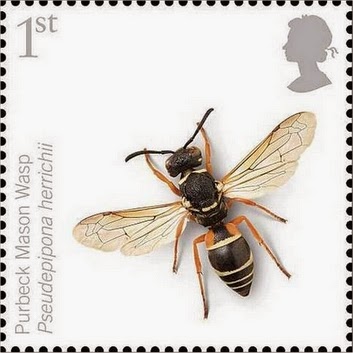 It's another creature that is very particular as to habitat and so a small environmental change is an existential threat.  It only lives on the heathlands with plenty of Bell Heather, Erica cinerea, of the Isle of Purbeck and there it requires the very few outcrops of clay lenses amongst the sandy soils in which to dig its burrows.  It is in these burrows that the wasp lays its eggs, having first provisioned the hole with just seven caterpillars of the Tortricoid moth, Acleris hyemana, the wasp's only prey species, on which the emerging wasp larvae can feed.  The ground is kept bare by just the right amount of trampling by ponies. It is thought that the wasp now only occurs in about six sites and sometimes they are hard to find, as this report in which an extensive survey is described; no actual wasps were seen!  P.herrichii is a holoarctic species with a distribution across much of the northern hemisphere.  It is rare in Western Europe but occurs throughout North America where its behaviour and prey species are different to the British population.

The next story told by David Shephard was that of the Hazel Pot Beetle, Cryptocephalus coryli. This is another that earned itself a place on the postage stamps in 2008. 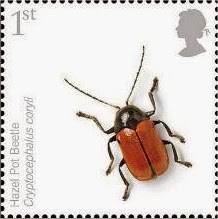 This beetle encases its eggs in its own dung before dropping them on the ground amongst leaves, often birch, that is has cut off at the stalk and also allowed to fall.  The emerging lava feeds off the leaves, while remaining in its protective dung pot, enlarging it with it's own droppings.  Here's a general account of the pot beetles from Bug Life. Unlike the other creatures we heard about, this one is has its greatest abundance in Lincolnshire, with records at both Whisby and Kirkbymoorside nature reserves.  Once found across much of southern England, the only other sites are now in Oxfordshire and Sussex, with a new population established in Sherwood Forest. A more detailed account of C.coryli is in this report from Natural England about Sherwood Forest, which includes information about the Lincolnshire populations.

David's final story was that of the Reddish Buff Moth, Acosmetia caliginosa, now found only on the Isle of Wight, though it used to occur in the New forest and elsewhere in Hampshire.  It is confined to one site of wet scrubby heathland that, for a while, was maintained by the grazing of a few goats, fitted with bras to protect their udders from the buckthorn!  Its food plant is the Saw-wort, Serratula tinctoria, which, though widely distributed across England, has itself declined, through drainage and changed grassland management. It requires damp soil but a sunny site without shading from encroaching scrub and trees. A. caliginosa is found in local populations in Europe from France to Poland and southern Sweden.

Ken James gave a vote of thanks, concluding that David Shephard's talk had been more interesting than one that might have been given by that other David Shepherd, about elephants and trains. 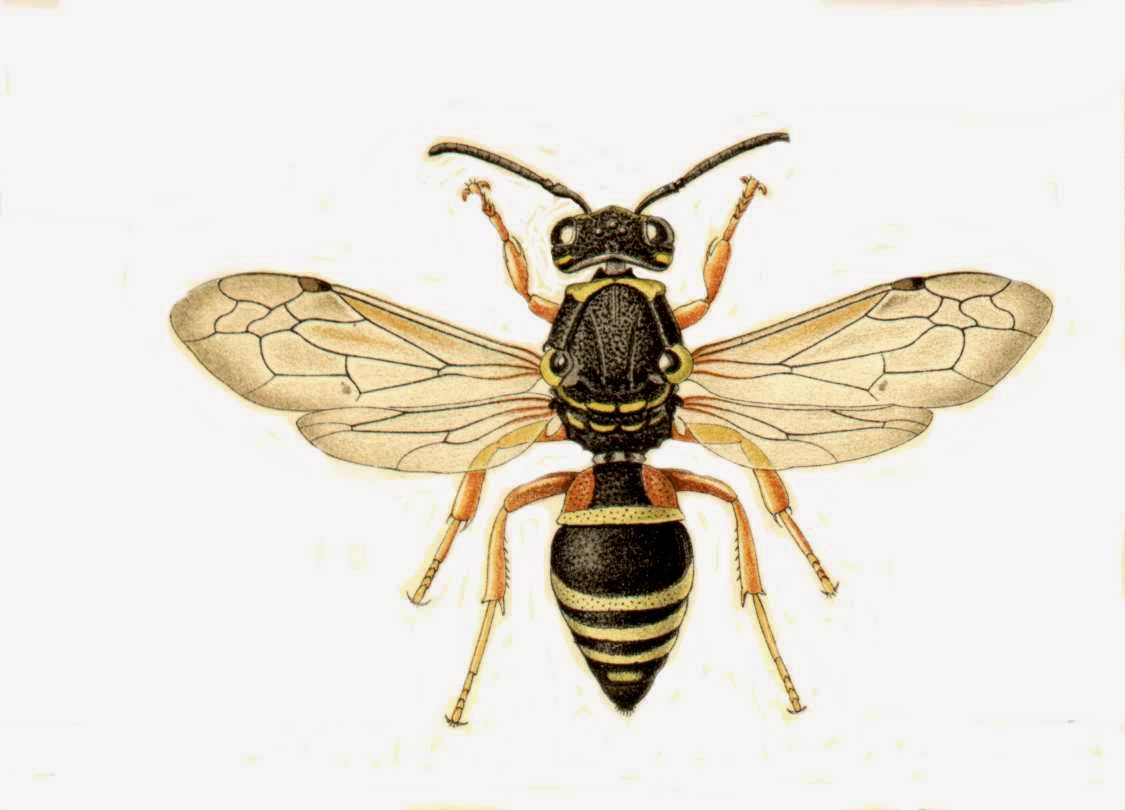