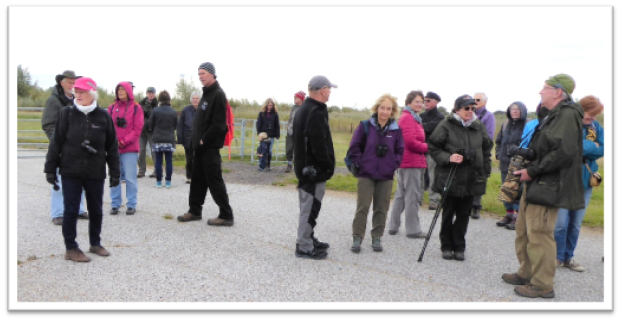 The first day of wintry weather did not deter over 30 people from many sources coming along to be enthralled by LWT Warden Kevin James as he described how the land went from farmland in 1941 to an RAF airfield. The base was the home of many Lancaster bomber squadrons including 617 – the Dambusters. We stood by the recently constructed war memorial which commemorates the 458 men who did not return home. I think that we were all saddened by the loss of life and some people were rather surprised to be reminded that most of these men would have been under 23.

Post-war the airfield eventually became a sand and gravel extraction site and the Lincolnshire Wildlife Trust bought the premises a few years ago. When the contractors left they took their pumps with them so what appeared to be sandy heathland rapidly became wetland and reed beds.

Kevin and his team of volunteers from the Horncastle Area Group assisted occasionally by contractors have a long and short-term programme to manage the site to make it look ‘natural’. Their efforts have been rewarded as wild fauna and flora slowly populates the area. One long-time, unwelcome insurgent is the Piri-piri burr which is native to New Zealand. It colonises ground very quickly and its burrs become entangled around insects and the feet of birds. The plant came to the airfield on the knapsacks of RNZAF personnel in 1944!

Our enthusiastic guide has a many facetted role. He tends a flock of black Hebridean sheep and a small herd of Lincoln Red cattle. He uses hydraulic engineering knowledge to manage the water levels to control the reeds, as well as having the overall management of this and other sites.

We did see a dozen or so species of birds including Egyptian geese and a tree full of Cormorants.
However, bird watching was not on list on Sunday. Nevertheless, the two large lakes are a haven for wild fowl and passage migrants. I shall be returning in the Winter months to spend some time in the hide. Contact me on lag2014rww@aol.com  if you would like to come along.  Ray Woodcock