For the sixth year, the peregrines maintained their presence at St. James’ Church. Following the failure of the 2019 brood when all five chicks failed to fledge – thought to be a combination of bad weather and poor parenting by an inexperienced female – we waited with a degree of apprehension for the pair to breed again.

A new nest tray with a protective roof was installed on the walkway on 24th January and by the 2nd March, pictures from the TV screen showed a depression in the gravel, proof that at least one of the pair had visited and ‘tried it for size’.

By the middle of March with COVID-19 sweeping the country, the church was closed to visitors, so we were relying Verger Dale Walker to provide any news, and on the 29th March, he revealed the falcon was now installed on the nest. On 11th April, Dale was able to check the TV screen and saw the falcon brooding at least two, and possibly more eggs. It was a month before we received a further report, when on the 10th May, 3 chicks were seen to be fed.

The chicks were ringed at the end of the month by Alan Ball under strict health security conditions, and thought to be two males and a female. By the 6th June, The chicks/young juveniles (eyases) were heard to call for the first time, showing that they are growing and demanding food, and on the 9th, we had the first glimpse of one of the juveniles peering through one of the castellations. A couple of days later, all 3 juveniles showed themselves

Two of the juveniles made their first flights on the morning of 18th June, predictably landing in gardens where they sat, looking quite confused. One was picked up in the rectory driveway by local vet Andy Cook, a bird of prey specialist, and carried up the stairway and released on the tower walkway. The other turned up in our garden, spending three hours on our shelter roof, before flying into a rose bush where I caught it (I’m not a bird of prey specialist!). So when Andy reappeared from the tower, it was my turn to climb the 198 steps with the peregrine struggling in its box.

Unlike previous years, all the juveniles made good progress and by 10th July, a juvenile was seen to bring in its own prey and by August, most of the juveniles were spending much of the day hunting away from the church, often returning noisily in the late afternoon. It’s likely that in another few weeks, views of the juveniles will be few and far between, so as I write this on 21st August, we can look back on a successful year.

Noted for the first time in Louth, our resident peregrines showed extreme territorial aggression towards any common buzzard within sight of the peregrines’ nest or the juveniles. We knew the peregrines in Exeter had brought down 21 buzzards in 190 attacks over a 6-month period, but it was the sight from our garden of the pair working together to attack and kill a buzzard passing near the church on 13th June that prompted us to log such events. In the following three weeks, 11 incidents were noted and the attacks only stopped when the juveniles were confidently flying.

For more information on Louth’s peregrines, or to purchase the booklet, visit: www.louthperegrines.org.uk 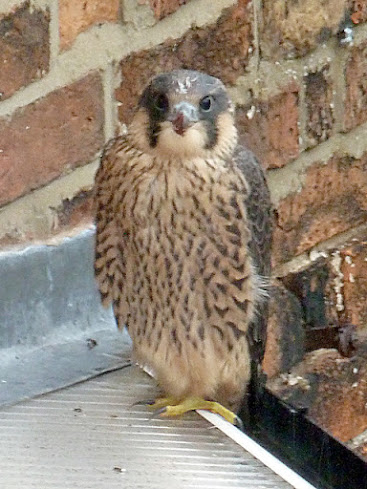 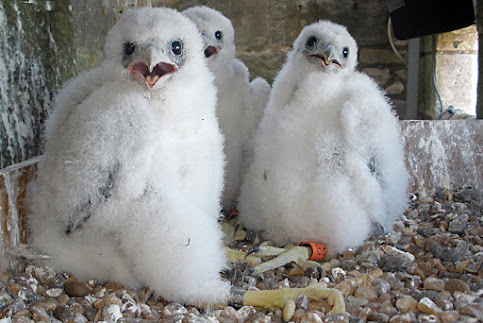